If you fear the kind of failure that could sink your dreams and endeavors, you’re not alone. Many people are kept up at night worrying about letting down their families, their organizations, or their ministries. In the case of a leader, missteps can take on greater weight. Think of leaders you’ve known who have struggled to redeem themselves after a catastrophic failure: is their business still alive? Their career? Their ministry? Are they?

Modern culture has an insatiable, voracious appetite for scandal, and leaders fallen from grace make for ripe targets. Most of us are guilty, too – merciless in our complaints, condemnation, and judgement, even when we would want to be given grace in our own shortcomings.

Forgiveness comes with a heavy price, and failed leaders must pay. Innocents often become causalities, and momentary foolishness can be a costly mistake with lifelong consequences. 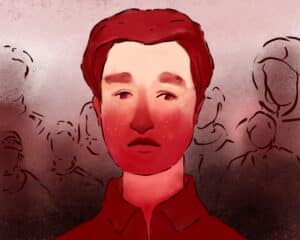 And yet… that is not how the Lord sees our failures.

Some Christians may believe that failure is the devil’s work or evidence of sin, but that’s not always the case. God often expects us to do great things, knowing that we could never manage it alone. He equips us mightily (Heb. 13:20-21), but we still inevitably find ourselves tripping over our own feet. Yet despite our shortcomings, God sees our potential and overlooks our weakness when we give our hearts to Him.

All throughout the Bible, God uses flawed men and women and transforms them into agents of change and revival. When He sees a humble heart of repentance, He will restore His child time and time again. No scandal is too great to keep someone from where the Lord wants them to be.

King David, for example, sinned publicly on numerous occasions. Most egregiously, perhaps, was when he forced one of his loyal men to die in battle in order to take the man’s wife. But David did not justify his sins – instead, he focused on restoring his relationship with God. As a result, David was never disqualified from his position despite his many flaws.

Samson followed the ways of the Nazarite and was a great judge in Israel. He failed to keep his vows, and as a result was imprisoned by the Philistines. Even so, God did not disqualify him as a leader of Israel. God saw Samson’s heart and gave him another chance to avenge the Israelites, killing more enemies in his death than his entire lifetime combined.

Then there is Peter, a disciple of Christ who fled and denied his master at the crucial hour. Peter, one of Jesus’ most trusted friends on earth, betrayed Him nearly as terribly as Judas did. However, Christ Himself gave Peter a second chance, restoring him as a leader of the apostles. Peter even went on to perform the first miracles after Pentecost (Acts 3:1-11).

While we can see failure as a permanent loss of standing with our good Father, He sees renewed opportunity. Perhaps it is not in our success that God teaches us His greatest lessons, but in our failures.

Sign up for Exclusive Text Offers - Text ISOW to 77411 Dismiss